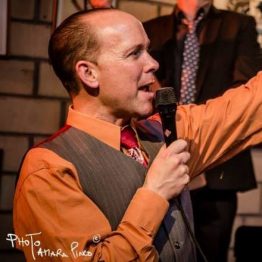 Lorenz started dancing at the age of 14, took classes in ballroom dances with a girl, he did not dare to say no to. He then continued with intensive training in Rock’n’Roll, Boogie Woogie (Crazy Shakers), Jazz Dance (Incognito), Tap, Argentine Tango and lately also Salsa. He visited Herrang Dance Camp the first time in 1992, where the virus Lindy Hop caught him badly. Since then, Lorenz organizes and teaches classes and Workshops in Zurich as well as some major cities in Europe and overseas. He has also taken part of Projects at the Opera and the Drama Theater Zurich, at Television and in the film business as Choreographer and Dancer. He leads and organizes his own Show Dance Company “Hellzapoppin’ Disaster”. Lorenz is also a well reknown DJ and MC for Swing Parties. Polylingual and slightly crazy he will let you share his passion for Lindy Hop!